Gang War Breaks Out in Denpasar 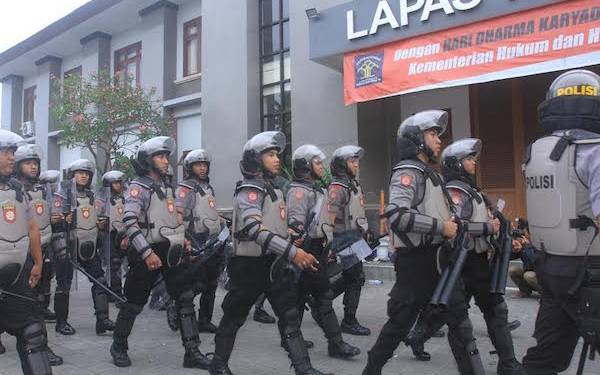 DENPASAR – Fatal clash between two groups in Bali on Thursday, December 17 has made the atmosphere of Denpasar and Badung very tense. Four people have been reported killed in an incident which initially broke out in Kerobokan Class II A Penitentiary.

Based on collected information from Radar Bali (JPNN Group), the clash happened between inmates in H block and C1 block. Latest update counted 4 people dead, 2 were dead in Kerobokan Penitentiary and the other 2 were dead on Teuku Umar Street with a lot more injured.

An inside source from the penitentiary informed that the clash started initially on Wednesday, December 16 at 11.00 local times. An attorney from Denpasar Prosecutor’s Office transferred the suspect killer of Royal Palace’s Boss Nyoman Budi from Denpasar Police Station to Kerobokan Penitentiary.

Three suspects from the same group, Tri Yulianto, Made Budiarta and Wayan Selamat had a jail visit in Kerobokan Penitentiary. Yesterday December 17, hundreds of the inmates’ friends came back to the penitentiary. “Some of them were seen while they were sitting around in front the penitentiary. They were visiting three inmates who had been involved in a stabbing case not long ago,” the source said.

At 15.00 p.m. local times, came along a visitor. Suddenly a fight broke out and the trigger has not been known yet. The source said that some of the penitentiary employees had run away and out of the prison to save themselves.

A witness, Selamat, stated that he saw one of the inmates from the same block as him fought in the prison yard. The brawl turned deadly as some of them were stabbed with the glass shards. He tried to calm them and took his partner back to the cell in Cempaka 1 block.

Other source said that Purnawan and Beji came from the visiting lounge. Beji was going into Cempaka 1 block when his partner Purnawan was grazed against one of the victims from H block. The clash broke out. Put into a tight spot, Purnawan took a shard and stabbed an inmate. His friends followed him stabbing.