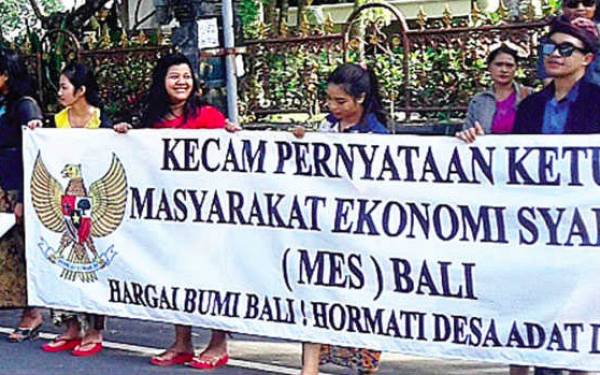 DENPASAR – A plan to include Bali Province as one of the 13 regions which are ready for developing sharia tourism has faced some opposition. Several people from various communities under the Alliance Caring for Bali such as Cakrawayu, Bali KMHDI, Bali Gases and Nusantara Foundation, protested peacefully on Tuesday November 24. They held the protest at Bali Legislative Council (DPRD) and Bali Provincial Office.

In his opinion, the resistance and opposition on the idea of sharia tourism was not of religious reasons but because sharia tourism is not appropriate to be implemented in Bali. He said that sharia values do not fit in with the essence of the locale and Bali’s cultural tourism concept which is based on Hinduism values. “That’s why we expect the people representatives of Bali to take a stand so it wouldn’t cause an uproar and more anxiety,” Dana said.

Bali Governor Made Mangku Pastika has also firmly opposed the idea of sharia tourism in Bali. He said that the idea had the potential to make Bali unconducive. “Who has that idea? Such a peculiar idea. It can cause an uproar and make Bali unconducive,” Pastika stated. He added that Bali has been calm and well. “If it (sharia tourism) is implemented, there will be chaos,” he said. (pra/pit/mas/apa/jpnn)