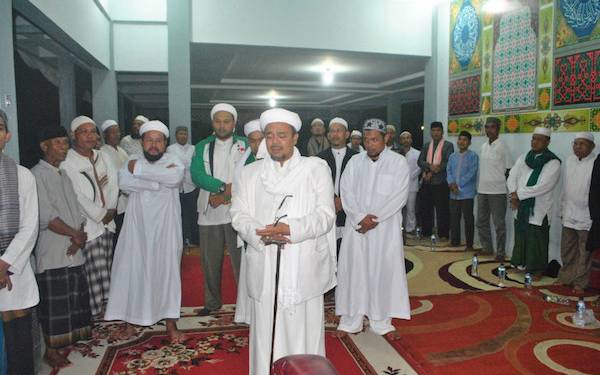 PURWAKARTA – The leader of the Islamic Defender’s Front (FPI), Rizieq Shihab, has fanned the flames of his quarrel with Purwakarta regent, Dedi Mulyadi. Rizieq Shihab has even claimed that Dedi have proposed and married The Queen of The South Seas (Nyi Roro Kidul).

“Since Dedi lead Purwakarta, he has tried to resurrect “Sundanese Wiwitan” teachings, so he decorates Purwakarta with various traditional wayang character statues such as Bima and Gatotkaca and even with Bali Hinduism statues,” Rizieq wrote on his official Facebook account.

He added that Dedi has also made a golden chariot which was rumored for his beloved wife, Nyi Roro Kidul. “The chariot is displayed in the regent traditional pavilion (pendopo), added with incense (kemenyan) and offerings (sesajen) every day. It is used once a year at the Cultural Festival, under the pretense of carrying Nyi Roro Kidul around the town for blessings and welfare of Purwakarta,” Rizieq said.

Futhermore, the number one figure of FPI also said that Dedi has recommended travelers who take Cipularang freeway to say Prabu Siliwangi’s name in order to have a safe pass. “And a few years ago, Dedi also said that the sound of a bamboo flute was sweeter than the voice of Al-Qur’an recital,” Rizieq said.

The trees along the main street of Purwakarta were decorated with “Poleng” garment, a piece of clothing with black and white checked pattern. According to Rizieq, that is not for beauty, but for expecting blessings as Hinduism in Bali. He added that Dedi often wears certain headband with a flower as spiritual leaders of Hinduism in Bali wear.

“Dedi is not proud of his identity as muslim, but he takes pride in his statues, offerings and superstitions, which are displayed under the cloak of local wisdoms,” Rizieq said.

In response to Rizieq Shihab’s claim on him having proposed and married Nyi Roro Kidul, Dedi Mulyadi has remained calm. He has given the FPI’s leader some advice and asked him to view social affair in Indonesia in a multidimensional perspective.

“To see Indonesia, do not only use one dimensional view, but see it in multidimensional one so that Indonesia can be beautiful and peaceful,” Dedi said on Friday November 27.