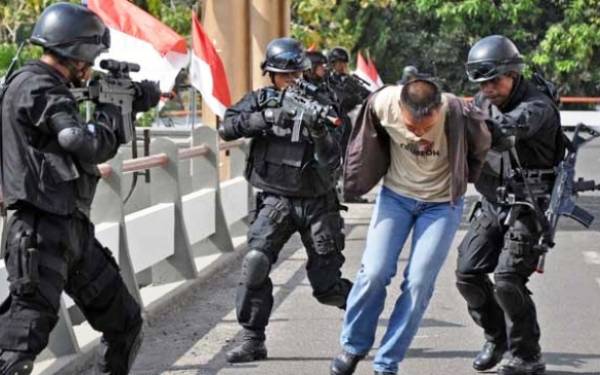 About the transfer to Mataram, Fajar claimed that he does not know the reason. But it is clear that the verdict is valid. The man connected to Poso terrorism network has been sentenced 6.5 years without performing further legal action.

“We arrived at the Institution at 14:00 p.m. local time,” he said. “I don’t know exactly (the reason for transfer). But it is an execution as the verdict is valid,” he added.

Ramuji was arrested by Densus 88 counter terrorism squad on Tuesday May 13, 2014 in Jalan Belimbing Raya, Paciran of Lamongan, East Java. He was apprehended with 10 other terrorists of Santoso network which is considered as the number one terrorism network in Indonesia.

At that time, Densus 88 retrieved 17 self-assembled rifles, 6 blades, 5 swords, 25 throwing knives, some bomb-making material and some documents. Other than Ramuji, Attorney General’s Office has also transferred Iskandar from Jakarta Class Two Detention Centre to Kupang Class Two Correctional Institution. Iskandar was transferred as he had been testified against the other terrorist, Syarifudin, Dompu natives arrested in April 2015 in Rangga Watu, Golo Desat Village, Mbeliling of West Manggarai.

“There were two transfers. One of them was for Iskandar, Dompu natives, transferred to Kupang Correctional Institution,” Fajar added. The Chief of Mataram Correctional Institution, Purniawal, confirmed the transfer. Ramuji arrived at the correctional institution around 14:00 p.m. local time. “Just one convict. We retrieved him yesterday (on Thursday),” he said. “He was separated from the other convicts. We can’t mix him with the population,” he added. .(fri/jlo/cr-lie/r3/apa/jpnn)