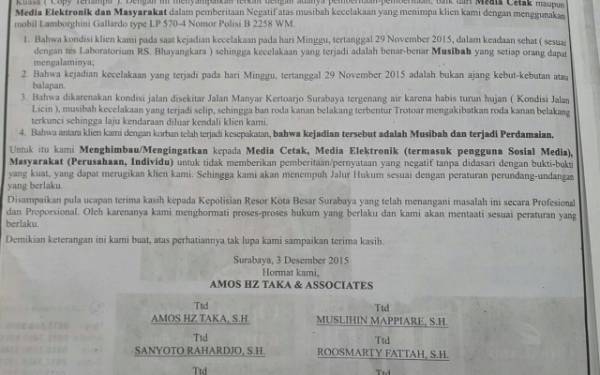 An ad in Jawa Pos displaying "threat" to those who condemns the accident, Thursday (3/11)

SURABAYA - A tragic Lamborghini accident which crashed into a milk street vendor in Surabaya on Sunday, November 29, has been the focus of public and media attention. The news revolved around the accident tends to push the driver around. In response to out-of-control “negative” news about their client, a team of lawyers of the Lamborghini driver, Wiyang Lautner, 24, has put an ad in Jawa Pos, one of the largest selling newspapers in Indonesia.

The lawyers insisted will take the matter to court if the media does not comply with their appeal.

In the ad, Amoz and Associates stated that the incident was purely accidental which can happen to anybody. “The incident happened on Sunday, November 29 2015 was not of a street race,” he claimed.

The lawyers also claimed that it happened because of the Manyar Kertoarjo road condition which was inundated and slippery. For that reason, the tyres skidded and the rear right tyre crashed into the pavement.

“It made the right tyre locked so the vehicle was out of our client’s control,” he added. Finally, Amoz stated that his client and the family of the casualties believed that it was purely accidental and had made an agreement of peaceful solution.